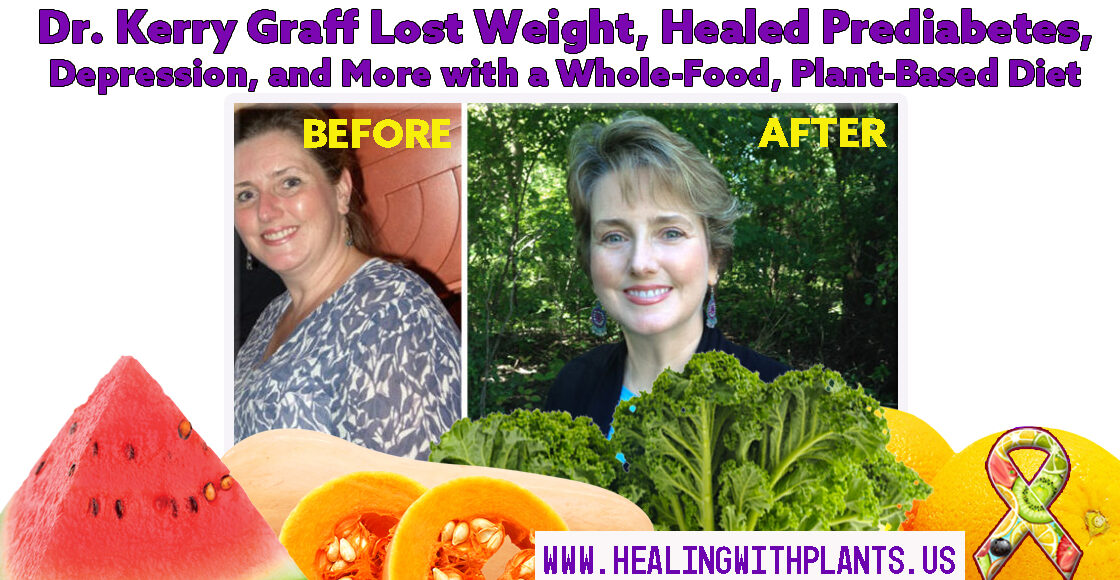 Dr. Kerry Graff, MD had an epiphany that not only changed the way she practiced medicine and what she prescribed her patients, but it saved her own health too. Based in Canandaigua, NY, Dr. Graff is an accomplished physician with her own private practice. She earned a biology degree from Cornell University in 1990 and completed medical training at the University of Pittsburgh School of Medicine in 1994. After completing a three-year Family Practice Residency at UPMC Shadyside in Pittsburgh, PA she relocated to Canandaigua, NY where she has practiced medicine ever since. But, despite her commitment to helping her patients find health, Dr. Graff was herself suffering from numerous health ailments when she made a life-changing discovery. According to Graff, she was 25 pounds overweight, prediabetic, and suffered from acid reflux, chronic constipation, hypothyroidism, and depression when she discovered the power of eating a whole-food, plant-based diet. This discovery would change her life and the way she practiced medicine going forward.

The Movie That Shined the Light on Food

Dr. Graff was skeptical when she first watched the documentary Forks Over Knives, a film that shows how a whole-food, plant-based diet can reverse some of today’s leading chronic diseases such as heart disease and diabetes. She was hoping to find that the experts featured in the film were quacks, mostly because their message challenged the way she had been practicing medicine for nearly two decades.

Was Everything She Had Been Prescribing Her Patients Worthless?

Dr. Graff shared her story with Forks Over Knives where she wrote,

“I desperately wanted the doctors in the movie to be complete veggie-loving quacks….Because if what they said was true, then the entire way I (and just about every doctor I knew) had been practicing medicine for nearly 18 years was just flat-out wrong. Could it be that all the pills and procedures I had prescribed were nearly worthless compared to all the good that a whole-food, plant-based (WFPB) diet could do?”

Dr. Graff says she might have gone on practicing medicine the same way she always had, but a certain question didn’t stop burning in her mind. She asked:

“Am I harming my patients by encouraging them to eat low-fat dairy foods?”

The question fueled her research into nutrition and the plant-based lifestyle. She set out to learn all she could about the connection between diet and disease and her quest convinced her that what we eat plays a defining role in our health outcomes. In her words:

“These FOK docs were legitimate. They were highly respected, well-educated physicians and researchers with a mountain of evidence to back their claim that the standard American diet was the overriding cause of most of America’s degenerative diseases and that a WFPB diet was the way to prevent, treat, and even reverse them.”

Dr. Graff’s initial reaction to her discovery was anger—she was mad that she hadn’t been told about the connection between diet and disease. Why, she wondered, was she not trained to consider the cause of disease and why had she not been trained to prescribe the most powerful intervention and treatment available: a plant-based diet.

The doctor’s next reaction was to try the diet out for herself. That’s when it really sunk in. She writes:

“I adopted the diet myself, and any lingering doubt quickly disappeared … along with my prediabetes, acid reflux, chronic constipation, hypothyroidism, and depression. To top it off, I lost an extra 25 pounds I had been carrying and had more energy than I had, well, ever!  When my patients came in for their appointments, many saw how much healthier I looked and asked me what I was doing.”

Sharing the Diet Cure with Her Patients

She started discussing the healing power of whole plant foods with her patients and found that they also experienced incredible success reversing chronic illness. Soon after, Dr. Graff made lifestyle medicine a cornerstone of her practice and began educating her patients on the multiple health benefits of eating more whole plant foods. He website now defines the optimal human diet well:

“What is a Whole Food Plant-Based Diet?
It’s a diet comprised of fruits, vegetables, whole grains, beans, nuts, and seeds. It avoids processed foods (like white flour, sugar, and oil) and animal products (meat, dairy, eggs, and fish). We recommend getting as close to this diet as possible because:

Today Dr. Kerry Graff runs a six-week plant-based nutrition class and helps to develop new tools for patients. She says that most of her medical colleagues are, “less than thrilled to see me challenging everything we have been trained to do, [but] I do it anyway.” Her greatest desire now is to live her life and practice medicine in way that inspires others to thrive. Not only did she lose weight and heal herself by eating the diet we are biologically-suited for, but now she is able to share the diet and inspire others to find greater health with plant-based nutrition.