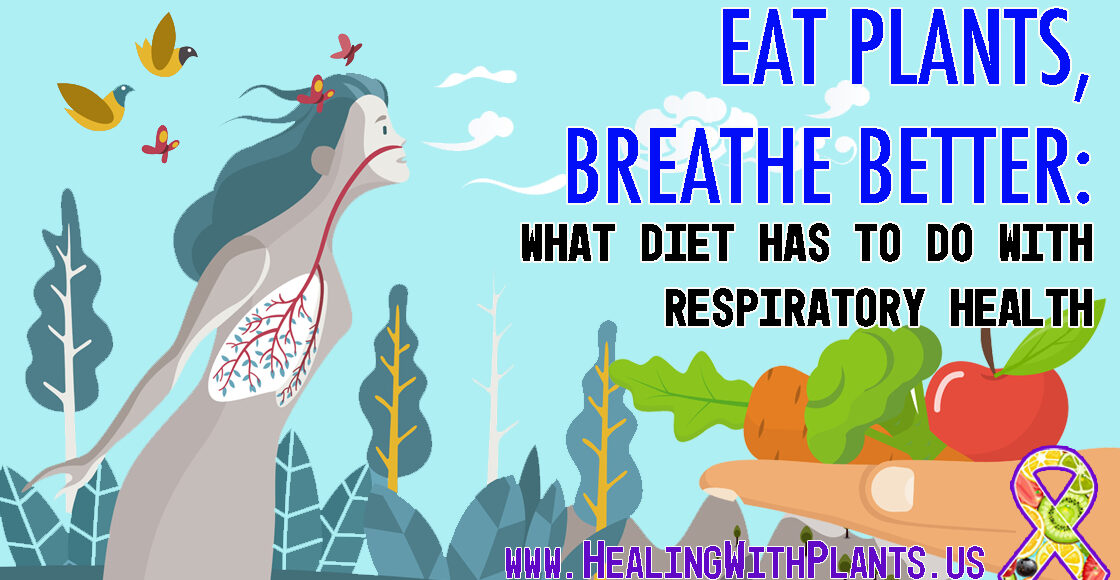 Why a Plant-Based Diet is Optimal for Respiratory Health

Your diet may influence the health of your respiratory system more than you realize. While breathing and eating may seem like two quite separate phenomenon regulated by two separate body systems, the two essential actions required for human life are in fact quite intertwined. If you have trouble breathing, are a current or former smoker, are diagnosed with asthma, or have other respiratory issues, improving your nutrition may hold the promise for better health to come.

What Does Diet Have to Do With Breathing

Several large population studies show that people who eat more fruits and vegetables and fewer animal foods have less lung disease. One such study included 52,325 Chinese subjects and found that people who ate a diet rich in meat reported new onset of persistent cough with phlegm 43% more often than those whose diets were centered around vegetables, fruit, and soy (Butler, 2006). Another study of 2,917 middle aged men from Finland, Italy, and the Netherlands found that fruit consumption (and vitamin E) were inversely correlated with chronic obstructive pulmonary disease (COPD ). Their results suggest that eating fruit protects against lung disease (Walda, 2002).

It turns out that carrying extra weight is a detriment to healthy respiratory function and that losing weight can be the most effective remedy to improve breathing and lung health. In one study 58 obese women with asthma who participated in a 6-month weight loss program improved their lung function and respiratory health status (Aaron, 2004). Another study of obese sedentary men aged 46-80 found that weight loss, but not aerobic exercise, improved lung function. The study placed subjects either in a weight loss group or an aerobic exercise group. The weight loss group decreased their body fat by 11% during the study and improved in several markers of lung capacity and function. The  subjects on the aerobic exercise intervention and the control subjects had no change in lung function during the study. The researchers concluded that,

“Some of the alterations in static lung function associated with aging may be due to the development of obesity and are modifiable by weight loss.” (Womack, 2000)

“The reduction in lung function is largely due to the body fat that builds up inside the abdomen and pushes up against the main breathing muscle, the diaphragm, and thereby restricting the capacity of the lungs to expand. Lung function improves following weight loss in obese people” (McDougall, 2010).

A High Fat Diet Slows Blood Circulation to the Lungs

Studies show that eating a diet high in fat can reduce blood circulation through the airways and can affect the oxygenation of your blood (Cornell, 2019; Kuo, 1959). It doesn’t take years for a high-fat diet to wreak havoc on your respiratory system. Within hours of eating a high fat meal, blood circulation slows—including to your lungs. Dr. John McDougall explains,

“Approximately one hour after a fatty meal, the cells begin to stick together upon contact and form clumps. As this clump formation progresses, the flow of blood slows. Six hours after the meal, the clumping becomes so severe that the blood flow actually stops in many small vessels. Several hours later the clumps break up and the blood flow returns to the tissues. As a result of these changes, the oxygen content of the blood decreases by 20 percent” (McDougall, 2010).

Acid Reflux, known as gastrointestinal reflux disease (GERD) is known to cause complications including asthma and COPD (Hogan, 2001). For people suffering GERD, acid from the stomach refluxes up into the mouth and is inhaled into the lungs causing serious inflammation. Stomach acid burns the body’s airway tubes and tissues which leads to mucus, swelling, and constriction. Studies suggest that resolving acid reflux leads to improvements in symptoms among asthmatics an can lead to long-term improvements in respiratory health (Simpson, 1995). Eating a diet rich in fruits and vegetables is one way to protect against acid reflux. In a study of 3,979 adults, 24% which had GERD, those who ate the most fruits and veggies were 33% less likely to suffer from acid reflux. Overweight participants who ate the most fruit were 44% less likely to have GERD. The researchers fond that eating fruits and vegetables was found to be protective amongst all groups. (Keshteli, 2017)

Fruits and Veggies Protect Against Smoking

We tend to think of smoking as the biggest risk factor for lung disease, but it turns out that diet again can determine whether a smoker develops respiratory disease. Dr. John McDougall points out that, while Japan has a greater percentage of people who smoke than in the United States, the risk of lung cancer is 10 times higher in the U.S. than in Japan. The difference in lung cancer risks between the nations can be explained by the difference in diets between the two countries, according to Dr. McDougall. He writes,

“These findings point to the importance of the differences in the diets followed in Japan and the US. The starch-based (rice and vegetable) diet followed by most Japanese smokers allows the body to defend and repair the damage from smoked tobacco far more effectively than does  a diet of fat and protein (meat and dairy products); the American diet.” (McDougall, 2010).

Researchers have suggested one explanation for why eating more meat is associated with more lung disease. Cured meats are high in nitrites which generate a reactive nitrogen that may cause damage to the lungs leading to emphysema. In one study of 42,915 men, 111 cases of newly-diagnosed COPD were identified and the results from food frequency questionnaires were evaluated. After adjusting for age, smoking status, length of time smoking, BMI, physical activity, energy intake, and race//ethnicity, eating cured meat was positively associated with the risk of a new COPD diagnosis. The researchers suggest that cured meat, “may worsen the adverse effects of smoking on risk of COPD” (Varraso, 2007).

Another study of 7,352 participants 45-years old or older also found that frequent cured meat consumption was associated, independent of other factors, with lung function (Jiang, 2007). The results of both studies suggest that eating more cured meat will put you at greater risk of developing COPD, regardless of smoking status, exercise, or other lifestyle factors.

For anyone suffering respiratory distress, consider switching to a plant-based diet. The natural diet your human anatomy and physiology has evolved to expect will support optimal lung function and help maintain your breathe of life, free from illness or obstruction.