If you or someone you know is battling cancer, you may want to make this recipe for Cancer-Fighting Salad your new daily dinner (or lunch). This easy recipe contains the top foods that have been scientifically shown to protect against cancer, stopping cancer growth in its tracks and reversing its progress. Combined with the easy-to make sweet and spicy Superfood Sauce salad dressing, the Cancer-Fighting Salad recipe I’m sharing here may just be the natural medicine you need to kick cancer to the curb.

Why Science Says These Six are Superstar Cancer Fighters

If you want to go all the way in with your Cancer-Fighting Salad, add some Superfood Sauce dressing on top. This simple salad dressing contains a whopping dose of superfoods that science has shown are the best of the best for preventing and reversing cancer growth. Many of the ingredients in the dressing are the same ingredients we used to make the salad, with a couple additions to give your salad some extra medicinal zing. What’s great about this dressing is that it will last for at least a couple weeks in the fridge, so you can use it to top your daily salads, veggies, baked potato, or pasta, or as natural cancer-fighting medicine to take by the spoonful. Here’s what you’ll need:

It’s worth noting that blackberries contain a large amount of small seeds that may be more noticeable compared to other berries. The crunchiness of the berry seeds may bother some, and if so you are welcome to use a strainer to remove the seeds from the rest of the sauce. However, it is likely that at least some of the medicinal value of these berries is derived from the seeds themselves. Personally, I don’t mind a little blackberry seeds crunch and it’s definitely worth the nutritional benefits to me, so I leave them in.

If you want to use nutrition to heal cancer naturally, why not make Cancer Fighting Salad a daily feature on your menu. Here’s a few tips for making your own daily salad that stops cancer in its tracks and helps you heal naturally with nutrition:

May this Cancer Fighting Salad and Superfood Sauce salad dressing nourish your body with the natural medicine of whole plant foods to banish cancer for good, restore health and balance, and protect you against disease one delicious bite at a time. 🍓🎗️💜

Cancer is the second leading cause of preventable death in the United States after heart disease. According to the American Cancer Society, in 2019 more than 1.7 million Americans were diagnosed with cancer and 606,880 Americans died of cancer. This recipe is dedicated to a family friend currently battling colon cancer. I recently published an article about healing colon cancer with diet, but here I provide an easy recipe to help you do just that. This article was also inspired by a passage in Dr.Michael Greger’s book How Not To Diet where he discusses the key ingredients to making a cancer-fighting salad.

Print Recipe
RECIPE: Cancer Fighting Salad
This sweet and savory salad combines soft spinach leaves, juicy fruits and crunchy cabbage and walnuts for a medicinal blend of cancer-fighting culinary delight. Satisfy your taste buds and nourish your body with the whole plant foods that science shows are the best of the best for kicking cancer to the curb. 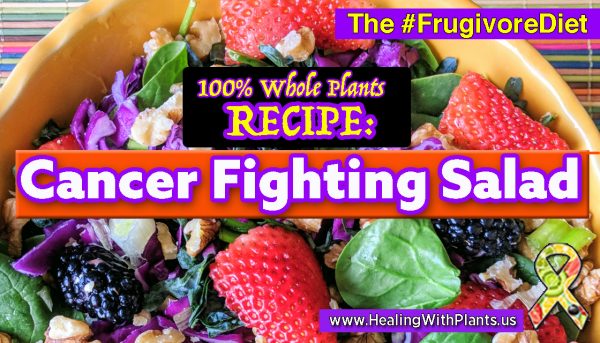