2 The Health Benefits of Celery • Healing With Plants

The Health Benefits of Celery 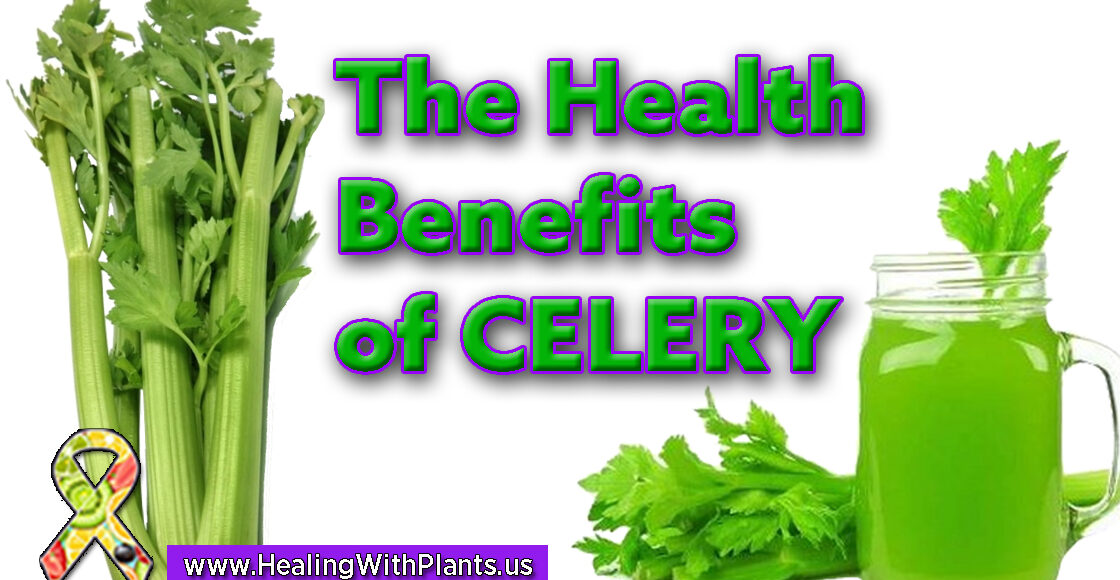 Dear Healing With Plants,
I’m curious about what you think about celery juicing? I did it last year for awhile and honestly felt great, but I would like to know if it has any health value, if there are any dangers, and if you should do it daily, weekly…? Thanks! — Curious About Celery Juice

Celery and celery juice has been the center of attention for many health-seekers lately, but what does science say about the real health benefits of celery? The internet and social media contain a host of opinions and testimonials from people who say celery can cure inflammation, high cholesterol, high blood pressure, cancer, and more. But is there really evidence to back up the claims of the celery juicing fad? In this article we’ll discuss the nutrition facts and scientific research revealing the true health benefits of celery.

Let’s start with the basics. Eating, or drinking, celery will definitely bless you with a variety of essential nutrients. Like all whole plant foods, celery contains a wide array of macronutrients, micronutrients, and phytonutrients—the disease-preventing nutrients found only in plants. Particularly noteworthy, celery is low in calories, high in fiber and water, and a good source of vitamins K, A, B2, B6 and C. Here’s just some of the nutrients you get from eating two large whole celery stalks:

A study of mice with asthma and rhinitis (an inflammatory disease affecting the airway), examined whether luteolin would reduce inflammation and help reduce the allergic response. The researchers found that mice who were give luteolin 30 minutes before exposure to an allergen had significantly reduced levels of inflammation in their lungs and airways.

Another study gave mice with arthritis the antioxidant apigenin and found that apigenin reduced arthritis symptoms by suppressing the immune response that triggers inflammation.

Celery contains the flavonoid luteolin which research suggests may have cancer fighting properties by preventing the spread of cancer and inducing cancer cell death.

Another compound in celery with cancer-fighting properties is apigenin. Lab tests of this compound have showed apigenin not only helps destroy free radicals in the body, it may help promote cancer cell death. Additionally, apigenin appears to promote autophagy, the process by which your body cleans out damaged cells helping to prevent cancer and other diseases.

Celery Could Have Neuroprotective Health Benefits

Eating celery may also be good for your brain. A 2008 study conducted by researchers at the University of Illinois found that a flavonoid found in celery reduces inflammatory response in the brain. Inflammation plays a key role in many neurodegenerative diseases and is believed to be responsible for many of the cognitive and behavioral insults of aging. The researchers suggest this celery compound may be useful in treating Alzheimers or in slowing cognitive decline:

“If you had the potential to decrease the production of inflammatory cytokines in the brain you could potentially limit the cognitive deficits that result.”

Apigenin, the same compound in celery that may have cancer-fighting properties, may also help stimulate the growth of nerve cells. In a 2009 study, rats that were given apigenin experienced an improvements in memory and learning ability and had increased nerve cell generation. A 2017 study found apigenin ameliorated post-stroke cognitive deficits in rats. Another study examined the effect of various plant chemicals on rodents with Alzheimer’s disease and found that apigenin limits damage of brain processes, thus delaying the progression of Alzheimer’s.

Are There Any Dangers of Drinking Celery Juice?

While eating celery or drinking celery juice is relatively safe for most people, there are a couple potential dangers to be aware of.

If you want to make celery a part of your health-promoting diet, you may want to choose to buy organic. Celery ranked #11 on the 2020 “Dirty Dozen” list, published by the Environmental Working Group, which ranks the conventionally grown fruits and veggies most likely to contain in pesticides. If you can’t buy organic celery, at least make sure to thoroughly rinse your celery before consuming to remove as much pesticide residue as possible.

Some People Are Allergic

Celery allergies are fairly common among those who suffer allergies, especially those with hay fever (aka allergic rhinitis). Eating or drinking celery can trigger a severe allergic reaction for some people. If you have difficulty breathing, experience swelling, or break out in hives after consuming celery, you need to seek emergency medical attention. For an unlucky few, celery could cause an anaphylaxis reaction which can be fatal. Pregnant women are cautioned against consuming celery seed supplements which may cause uterine stimulation.

Celery May Increase Your Sensitivity to the Sun

Celery contains the compound psoralen which may make your skin more sensitive to the sun. Eating foods high in this chemical can increase your skin’s sensitivity to UV light and put you at increased risk of sun damage, dermatitis, and photoaging. You can avoid a big part of the risk by avoiding getting celery juice directly on your skin if you plan to be out in the sun. If you do go out in the sun with celery juice on your skin you may be at risk for a sun burn rash which may appear 12-36 hours after sun exposure and could last for up to five days.

You May Want to Count Your Sodium

Just two large stalks of celery contain a whopping 102.4 mg of natural sodium. The current U.S. dietary guidelines recommend that Americans consume less than 2,300 mg of sodium per day—that’s roughly 1 tsp. of salt. If you juiced two average-sized celery bunches (~2 lbs of celery) you would be consuming about 726 mg of sodium, or nearly a third of your daily sodium limit for a healthy diet. Consuming too much salt comes with its own host of health problems, so its in your best interest to be aware of how much sodium you are consuming.

Are the Health Benefits of Celery Special Among Veggies?

While there are definitely beneficial compounds in celery that can help you prevent diseases and thrive, other veggies may also contain these same compounds. There is currently no evidence to suggest celery is more beneficial than other fruits and veggies overall. Different plants contain their own unique nutrient cocktail and so there are plenty of good reasons to switch it up and savor the flavor of many types of plant foods. In order to get all the essential nutrients you need to thrive, aim to eat a variety of fruits and vegetables everyday. Also remember that the colors of plants are clues to the types of phytonutrients they contain and chose foods from all the colors of the rainbow.

How To Add Celery to Your Diet

Is juicing celery better than simply eating celery whole? While juicing celery may give you a liquid shot of micronutrients, you are missing out on the fiber and potentially other beneficial nutrients. A study published in the journal Preventive Nutrition and Food Science compared the affects of blending and juicing on the phytochemicals contents and antioxidant capacity content of several fruits. Researchers discovered that juiced fruits suffered a significant loss of these beneficial nutrients when compared to the blended fruits which retained their pulp. Apple, pear, persimmon, and mandarin oranges that were blended had stronger antioxidant power and contained larger amounts of phytonutrients than the juices of these same fruits. The results suggest that some of these nutrients are wrapped up in the fiber of the fruits which is removed during juicing. While no such study has been done on celery in particular, it is possible that we might see the same effect. Some beneficial nutrients and antioxidants may get tied up in the fiber of celery and thus you’ll be missing out on these in your celery juice.

How Often Should You Drink Celery Juice?

While some internet health gurus suggest making celery juice your daily breakfast, there is no science evidence that drinking celery juice is more beneficial than drinking the juice of any other fruit or veggie. The main advantage to juicing celery would be to get a concentrated dose of nutrients since juicing removes the fiber and leaves the micronutrients behind. While it may be hard to consume a whole head of celery or two for breakfast, it would be much easier to drink its juice once the bulky fiber is removed. However, fiber is also an important nutrient. If you do choose to juice your celery, make sure you are still eating plenty of whole plant foods for a healthy dose of fiber every day. Other whole plant foods are also loaded with an array of beneficial nutrients, so be sure to eat a variety and eat from all the colors of the rainbow to get the full spectrum of protective phytonutrients.

Raw vs. Cooked Celery: Which is Better

Some fruits and veggies may lose much of their nutritional value when cooked by various methods. Luckily, celery can be cooked while still retaining most of its nutrients. A study published in the Journal of Food Science evaluated the influence of cooking methods on antioxidant activity of various vegetables and found that celery increased its antioxidant capacity in all the cooking methods, except boiling. But even boiled celery retained 86% of it’s antioxidant power. Other studies have found that in order to get the maximum antioxidant value from your celery, you want to consume it as soon as you can after buying it and make sure to consume it soon after its chopped. Celery loses a significant amount of its antioxidants after five to seven days and after it is chopped and stored.

Savor the Flavor of Celery

If all this nutrition science is making you crave a crunchy celery stick, I have a few ideas to help you get more of what this watery green veggie has to offer. There are many great ways to add celery to your diet besides simply snacking on a stalk or juicing a bunch.

What are your favorite ways to enjoy celery while getting all its amazing health benefits? Share your ideas in the comments below.