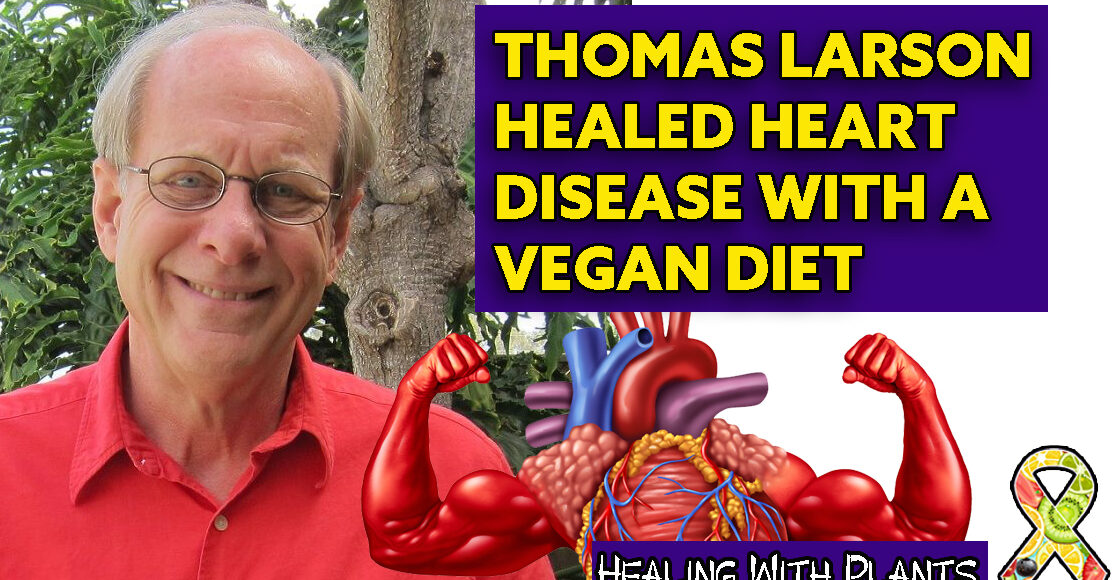 Thomas Larson had suffered three heart attacks before he switched to a vegan diet and healed heart disease.

Thomas, an author, staff writer for the San Diego Reader, and college writing professor, thought he had already found the key to being a “right” eater when he switched to a vegetarian diet decades before his battle with heart disease arose. When he suffered his first heart attack and was saved by an angioplasty, three stents, and statin drugs. He thought he was getting better and increased his exercise, but two heart attacks, three more stents, and plenty of medications later, he knew he had to make a change. As a vegetarian, Thomas had continued to eat chicken eggs, whole milk, Swiss cheese, vanilla yogurt, and deep-dish pizza. He realized this diet wasn’t working for his heart and, if he wanted to get better, he’d have to ditch the whole cow. In an article for the San Diego Reader he writes,

“could it be any clearer that the only thing left for me to do, in addition to interventional treatment, exercise, and drugs, was to give up dairy and eat plants?”

Thomas made a change to his diet that likely saved him further heart attacks and probably saved his life. He switched from a vegetarian to a vegan diet comprised solely of plants. The switch made the difference. He writes,

“I did improve — but only after I discovered that what went in my mouth made me sick and kept me sick. I improved, dramatically, after I cut out the cow.”

Thomas took action to heal his heart by reading books and watching movies about plant diets for heart patients. He discovered the myriad advantages that an all plant diet has for heart health including that plant foods are naturally cholesterol-free. Plant foods also contain easily-assimilated nitrous oxide which is essential for arterial self repair. The benefits he experienced from his new diet did’t stop there. He writes,

“A plant-based diet is a friend with many benefits — I rarely have angina or other chest pains. I dropped thirty-five pounds; I don’t count calories; I don’t diet. I seldom suffer heartburn, so I don’t think it’s masked angina (I used to). I can drink red wine; my LDL is super low (46) as is my total cholesterol (106) and my arteries are less inflamed than they were. My sex life has been reborn with a fit, desirous partner. And while I do have the occasional fatigue-ridden day, it’s probably my old plaques, packed in during my dairy days, still seeping into, and gumming up, my stented coronaries. I’ll trade that last misfortune for all the other post-vegan advantages.”

Thomas details his journey to healing his heart in his book, The sanctuary of Illness: A Memoir of Heart Disease.

By simply switching to a plant-based diet, Thomas Larson healed his heart, prevented further heart attacks, and has become a healing ambassador for others shining the light on the simple diet solution that prevents and heals an ailing heart.